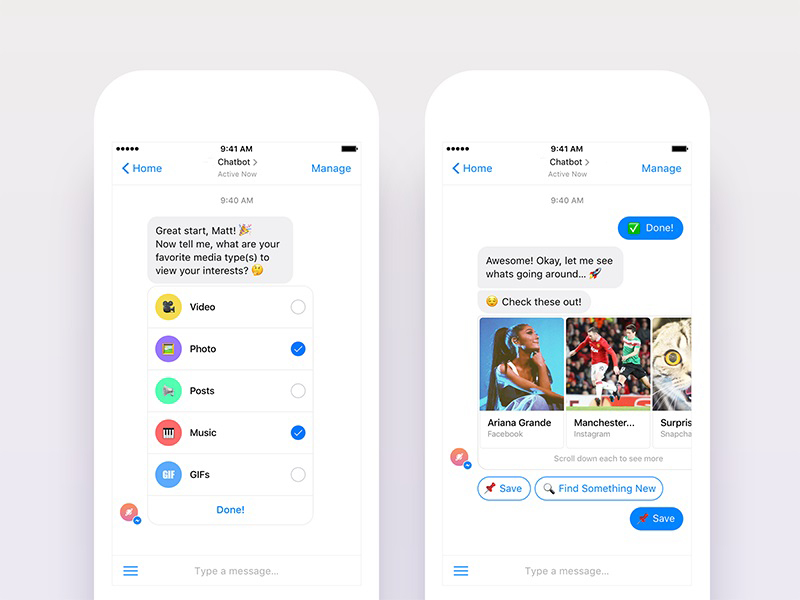 Mobile apps have been ruling the world for many years. Their army is so numerous, that you barely find the one you actually need. Still, the power of mobile applications remains very strong and it secures them to be significant players in the IT market.

But here comes another troop that is going to show its powerfulness – the chatbots. They are so trustworthy, that you can chat or talk to them as to a close friend. Are you ready to have a personal conversation with a machine?

“Over time bots should be usable in the offline world”, – Ted Livingston, Kik’s CEO.

he main difference between a chatbot and a mobile app is its oversimplified user interface. And this is the reason, why the bots are most likely to replace the applications in the nearest future. Let’s make a short excursion to the history of user interfaces. There are three main points of the evolution process. The first one is related to the command line. We may consider it as the origin of UX/UI design, the second one is the development of desktop interfaces navigated with a cursor.

The big boom in the IT technologies world was related to the third point of evolution which were the touchscreen interfaces. The time sets new standards and the development of chatbots is considered to be a new evolution point of the high-tech world. Bots are using the conversational interface, which is very close to the command line interface.

What are the chatbots? In a new wave meaning, they represent interactive services that provide a conversational experience. Although this element is included, the conversational UI doesn’t mean a simple question-response chat. The main feature of the bot is to understand the user and to reply instantly or make an appropriate action by the request. So the bot provides the solutions to different tasks using the simple UX models. For instance, you may book a ticket with a bot with much less efforts than making this routine action by your own.

The simple chat window is all you need to interact with your new digital friend. If you previously needed a separate application for ordering pizza, buying clothes, tracking the weather and reading the latest news, now you can perform all these actions without leaving the chat window.

From the functional standpoint, chatbots should be able to issue voice and text commands and receive responses in the form of a text in simple user interfaces. While most people consider chatbots text-only interfaces, we are already seeing the first iterations of simple UX models that can be used in bots solutions. The interactions are at the forefront of a qualitative UX and UI design.

Conversational UI is familiar to every user from the messaging services and apps. But the innovations in bot development could make the customer experience deeper using the interactions. The user starts the conversation with the bot by typing and sending it a message, as he would do it with a friend or with a personal assistant. The bot recognizes his query and looks for the best solution for it.

Some processes might take some time, the other can be executed at once, but it would be better to wait a bit instead of sending an immediate response. The main objective of UX is to make the bot work naturally. It must interact like a real human being, but a bit smarter and always ready to help. Let the bot take some time to “think” about the correct solution for the user’s query. It can indicate whether it is working on the solution by displaying some emoji react-icon.

Emojis also make the conversation with the bot more natural and entertaining. Another solution is to display “Bot is typing” text – it works like a real chat with a human being. Old-school short replies will also help to make positive UX. The bot should let the user know about the state of his query: “Done”, “Give me a minute”, “I’m on it”.

Such brief messages don’t annoy the user and keep him informed about the processes and the results. If the bot realizes that it will need more time to complete the task, it should inform the user that his query is in the process and not just keep silent for some minutes – that’s irritating and can disappoint the user and make him never use this bot again.

Slack has built a messaging company, valued at $3.8 billion, on bots.

Bot’s behavior is a very important part of UX. It should be conversational, chat in natural tone, humorous when it is appropriate and businesslike when it is not. The bot must be also able to learn from the conversation. If the user is asking for a weather forecast for the same city day by day or booking train tickets in a particular direction every Friday the bot should recognize this and offer a ready solution straight away.

Personalization is very important as well. When the bot addresses the user with “Hello, Anonymous” it doesn’t make a good impression and deducts some points from the UX. The bot should kindly ask the user about his name (if it doesn’t know it so far). This action will build nice relationship between the bot and the user from the very beginning of the conversation.

he design of the conversational interfaces is completely different from UI and UX design of the applications. Bots use simplified interfaces but operate some sort artificial intelligence, that allows them to interact with the user just like a real person. Behind each bot is a well-designed personality with its character and its own conversation style. A well-done bot evokes a strong desire to type “Thank you”, even if the user knows that he is chatting with a machine.

The conversational UI of the bots allows users to interact with businesses like they would with a person. This allows businesses to build trustworthy relationships with their clients and to improve their services.

In conclusion, we can say that bots are not going to replace mobile apps. On the other hand, their emergence is making felicitous attempts to become a good complement to the human – bot interaction.